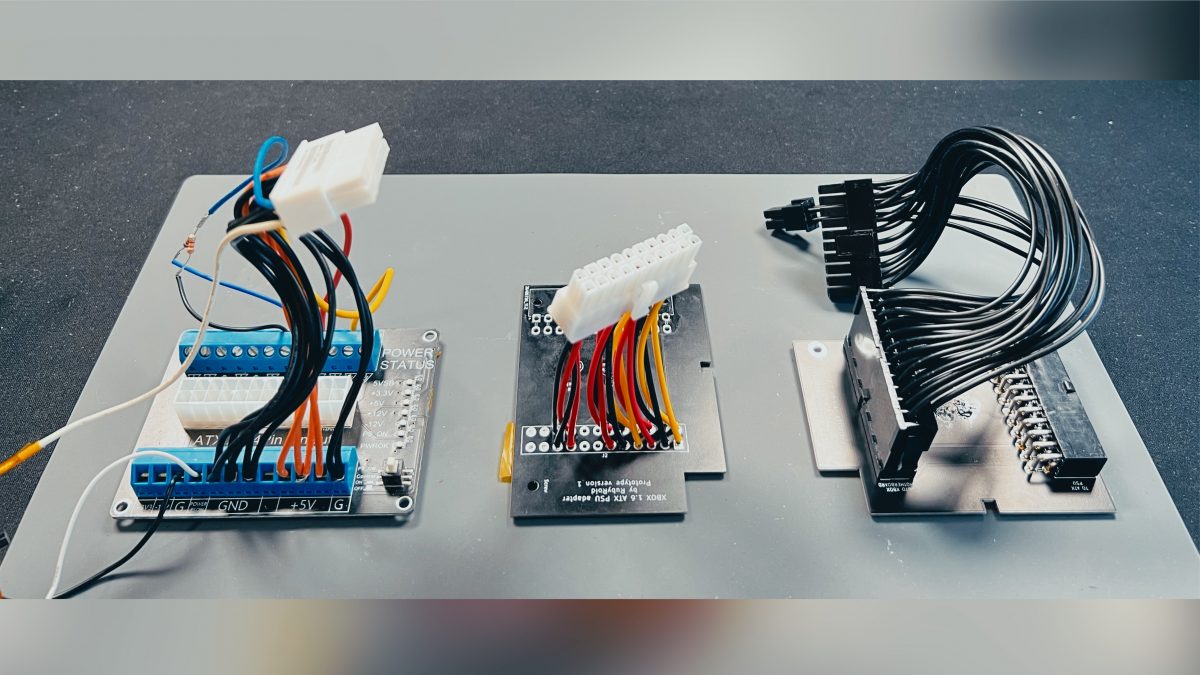 I know there hasn’t been an update in this blog for a while but now I’m working on a new exciting project which I’d like to share with you all.

I do have a late revision Xbox 1.6 that used to work fine until one day I shorted something to the PSU while fiddling inside the console while it was plugged in and the PSU died. I couldn’t find an affordable replacement but discovered that is it possible to use a standard PC power supply with an adapter.

Unfortunately I was able to find adapters for most console revisions except for the 1.6. So I decided to design it myself.

The goal was to make it slim and tiny, so the HDD caddy would fit on top to provide the intended airflow inside the case as I quickly discovered that without it the CPU overheats pretty fast.

In order to achieve that goal I needed a power supply that would fit inside that constrained space. I picked a PicoPSU, a really tiny PSU that takes very little space but requires an external power brick. That’s not an issue for me, so I went ahead and got one.

Additionally I got an ATX prototyping board to make the first prototype.

After I figured out the wiring I was able to successfully use the new PSU but it didn’t fit in the console as the prototyping board was a bit too large.

So the next step was to design a circuit board that would fit. I didn’t have much experience with that as the only board I made before was extremely simple (coincidentally it was another mod for the same Xbox).

I also needed to find and order the parts to confirm their size first. There is not much shops in my area that sell such components so I ordered everything on AliExpress and the waiting began.

In a couple of weeks the parts started to arrive and I made the first prototype of the board.

Typically, as soon as I ordered it, I found that the output wiring was mirrored, so when the boards arrived I’ve had to pay a lot of attention to solder the ATX power cable properly as any mistake might have destroyed the console.

Luckily, it worked, albeit only after finding and fixing several dumb mistakes. Naturally, I ordered the next board revision prior to that, so when it arrived I’ve had to apply the fixes again. At that point I decided not to hurry ordering the new boards and spent some time improving on the next prototype which I’m currently waiting to arrive.

This is how the current prototype looks like inside the console:

So what’s the progress at this point?

What are the future plans?

As soon as the new board revision will arrive it will be clear what other design adjustments are required. I expect it to need another two or three iterations till the design is finalised. I want to try several more things and add more features. I also need to test it with a couple more power supplies as currently I only tried it with PicoPSU. But I don’t think that would be an issue.

How much did it cost?

A lot! I could have easily bought several used consoles already but I really want to revive the one I have and make a unique project. And as I order more prototype boards and parts there will be more expenses on the way.

Will I release the design to the public?

Eventually I will opensource the design if a company like Bitfunx doesn’t clone my project sooner. But before that I would like to cover at least some expenses by selling PCBs and preassembled kits.

Is there a waiting list for the PCB or a kit?

I’m glad you asked! I’ve made this application form just for that. If you’re interested in getting one, please go ahead and fill in your details. I’ll get in touch as soon as I have it ready.

Are there any known issues with the project?

The biggest issue is that PicoPSU is not able to provide enough power on the 5V line in some cases which causes the console to turn off in the middle of the game. The removal of the DVD drive really helps as it decreases the power consumption but in some cases that is still not enough. I’ve searched for alternatives but most of them pump all the power into the 12V line which is not used much in the console especially when the DVD drive is removed. I’m curious if taking power from 12V line and converting it to 5V using DC-to-DC converter would solve the issue but I don’t really know if that’s a good idea. That’s the only Xbox 1.6 that I have and I don’t want to risk it.

Please let me know in the comments if you have any ideas, suggestions or an Xbox that you don’t afraid to sacrifice in the name of science.

That’s all I wanted to share about this project at this point and I hope to have more updates on it soon. Thanks for reading!

Thenaya — a homebrew app to clone amiibos with your 3DS

I love console games. Like to modify consoles and other related electronics.

This site uses Akismet to reduce spam. Learn how your comment data is processed.